When Design Thinking Saved Cricket and What We Can Learn

– by Chris Doherty and Utkarsh Manocha

The beginning of the 21st century was embedded with the zeitgeist of change. Wars, displacement, terrorism, political and social upheaval aplenty. But nothing articulates the change of this century quite like this little Wikipedia quote:

“The entire written works of humanity, from the beginning of recorded history to 2003, in all known languages, are estimated to be at five exabytes of data [1] [2]  Since 2003, with the beginning of social media and “user-generated content”, the same amount of data is created every two days.”[3]

This, of course, is hard to substantiate as anymore than a soundbite from a google executive, but it still holds a chance of truth, as we watch the proliferation of information, data, media, cats, comment and stupid dancing.

With this amount of information hurtling at us every day, does it surprise anyone that we find it difficult to have time for anything else?

Take cricket for example. Cricket is a game that was devised and developed to take its time. The complexities and nuances of the original game were dependant in large part on player fatigue, the worn out ball, the changing amount of moisture in the pitch and the changing wind conditions. All these tiny details, and more, lead to moments of extreme sporting feats with the bat and leather skinned ball. The dilemma, however, was that how in this new century of limited time could a 5 full-day game exist?

As we now know, the game too succumbed to the waves of change. In fact, it’s a great example of how the heuristics of Design Thinking, then a barely used term, came to help the game from getting caught behind.

In 2002, The England and Wales Cricket Board (ECB) had been struggling to compete with football (AKA soccer) for live attendances, broadcasting revenue, viewer ratings and sponsorship. It’s not a surprise as football is shorter, more colourful and more accessible to the general public given that almost everyone can relate to kicking a ball.

So how did the ECB find a way forward for cricket?

To put it simply, ECB figured out a way to make cricket simpler, shorter and an economically viable sport.

But how did they do this? 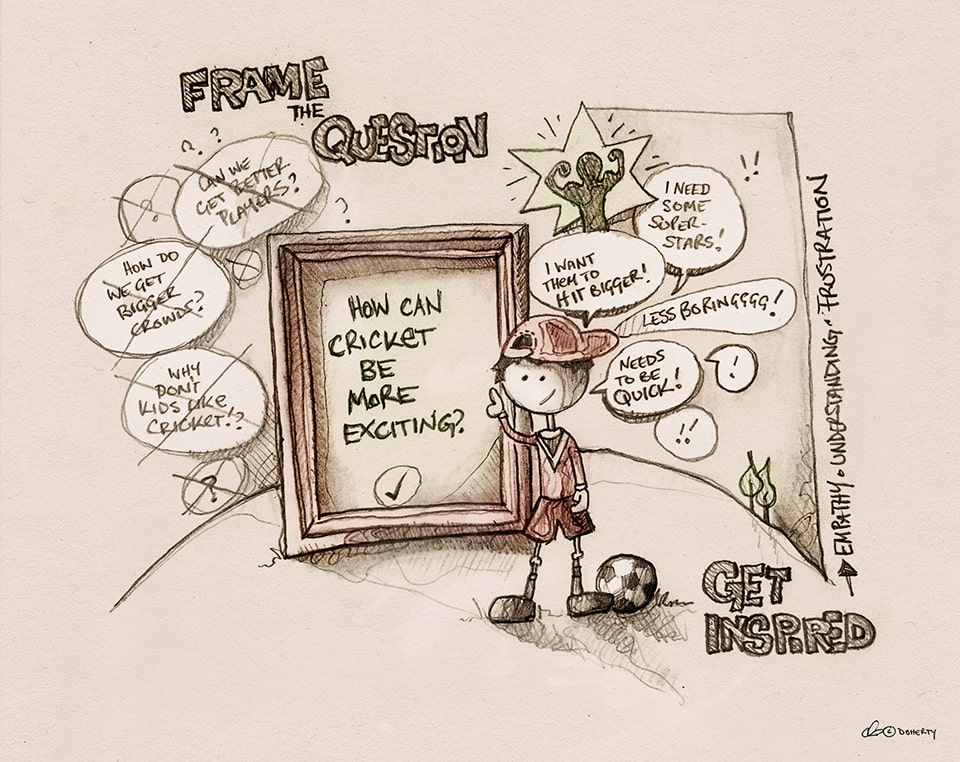 Seeing the problem with empathy

The ECB validated this approach by seeing and investigating the problem. Not by asking the registered players or the varied traditionalists and club members, but through a market research survey to the general sport (sic football) loving public. What they found was that cricket (even the one-day variety) was a slow and boring sport for a generation getting use to things at the click of a button. It also revealed that people only enjoyed the first 15 and the last 5 overs of the match.

Now this makes sense, doesn’t it? It’s in those gruelling 15 to 45 overs of a game that things get slow, the nuances of the game come to the fore, spectators head to the bar, and kids are asked to get on with their homework.

How could cricket be changed to take advantage of its most-popular segments, become more exciting and bring more spectators?

Approaching the problem in new ways

With a clear problem defined, the ECB started generating ideas. How might the shorter “one-day” rules be changed to accommodate a quicker and shorter game? Many radical suggestions were considered in an attempt to break away from the “traditionalist shackles” and attract a younger mass audience. 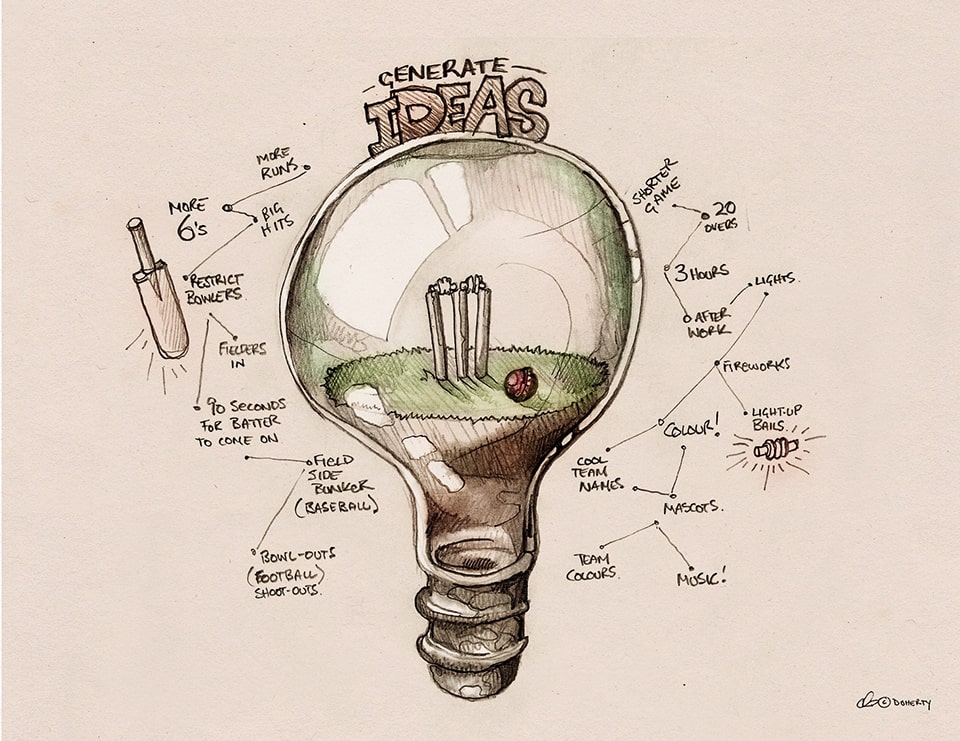 ECB understood that people did not want to see middle order batsmen defend and rotate strikes between overs 15 to 45, so they suggested that those bits be simply taken off. They devised new rules to keep the game moving, enabling batsmen to hit big, and created a spectacle that took precedence over sporting prowess. They then introduced the new Twenty20 cricket format into county cricket where it was played between 18 first-class counties. They watched, they promoted, and they continued to change things by asking spectators about each and everything they experienced.

ECB looked afield to other sports, and learnt how football, the NBA, the NFL, Australia’s AFL and NRL were able to acquire such loyal fans and big sponsorships. The answer in its simplest form, was they provided their fan-base a way to be loyal. Teams were categorised by regions and were assigned respective colours, mascots, themes and songs.

Twenty20 cricket was a game designed for the viewer; it took only 3 hours to play, was deliberately staged in June (the month with longest day hours) and it was boosted by additional entertainment in the form of music and interactive crowd events. 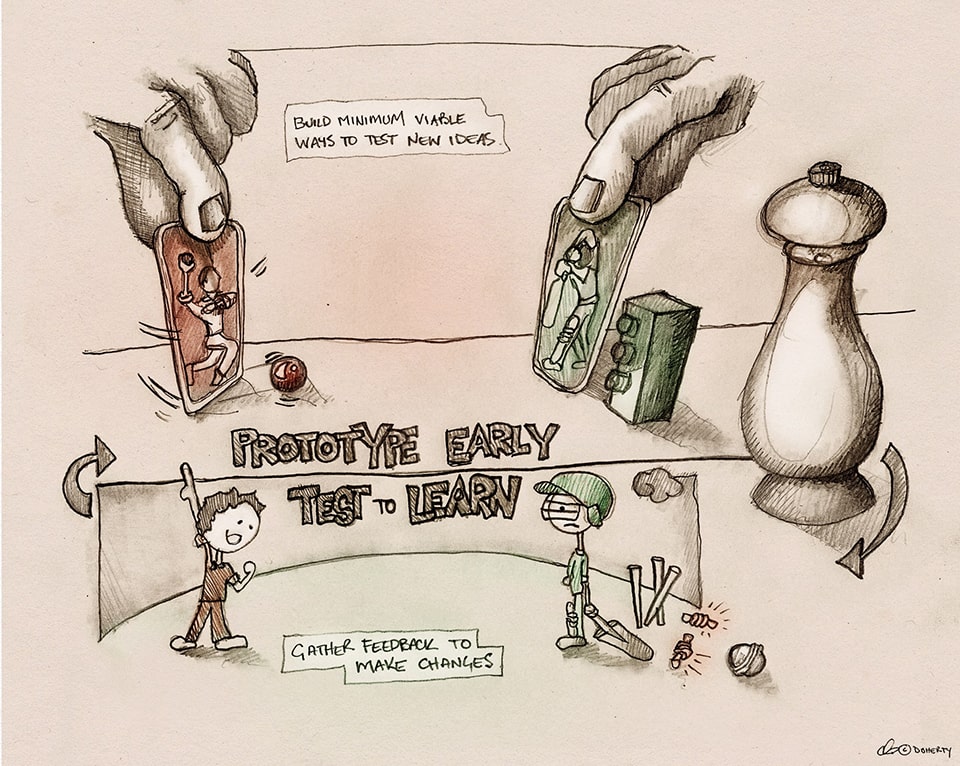 The game goes on

Since then, this version of the game has surpassed all expectations. It has iterated its rules continuously and further developed its entertaining style by asking fans what they need from the game. The IPL (Indian Premier League) is now, by far, the biggest revenue making competition that cricket has ever seen. Twenty20 cricket is a much more athletic and explosive form of the game, and has breathed new life and professionalism into the sport, extending also to the women’s competition becoming as competitive and professional as the men’s.

The success of the Twenty20 format is underpinned by the philosophy of keeping the people you design for at the centre of the development process. Framing a question that inspires others to search for answers. If outcomes are designed for, and to be used by the people, it only makes sense to understand what people need, design a concept and test that with them, and then develop a product. This is the Design Thinking approach, the approach that requires a different mindset to conventional problem-solving approaches, one that requires creative confidence, tolerance of failure, comfort with ambiguity and most importantly empathy.

Chris is the Creative Design Director at Noetic Group and Utkarsh is a Consultant. Both are cricket lovers sometimes supporting opposing teams. Chris is also an illustrator and design thinker and will be speaking about design thinking at PMI Sydney Chapter evening event this Thursday 23rd July.